On this day we honor the courageous and visionary leader Dr. Martin Luther King Jr., who saw the affront to human dignity of a racist society and stood up against it, saw the madness of war and opposed it, and saw the injustice of inequality and organized against it. In this tradition we continue to stand up against Trump and his cabinet nominees, and we work toward a just and equitable world that is only possible with a livable climate. In the words of Dr. King, “Now let us rededicate ourselves to the long and bitter, but beautiful, struggle for a new world.” 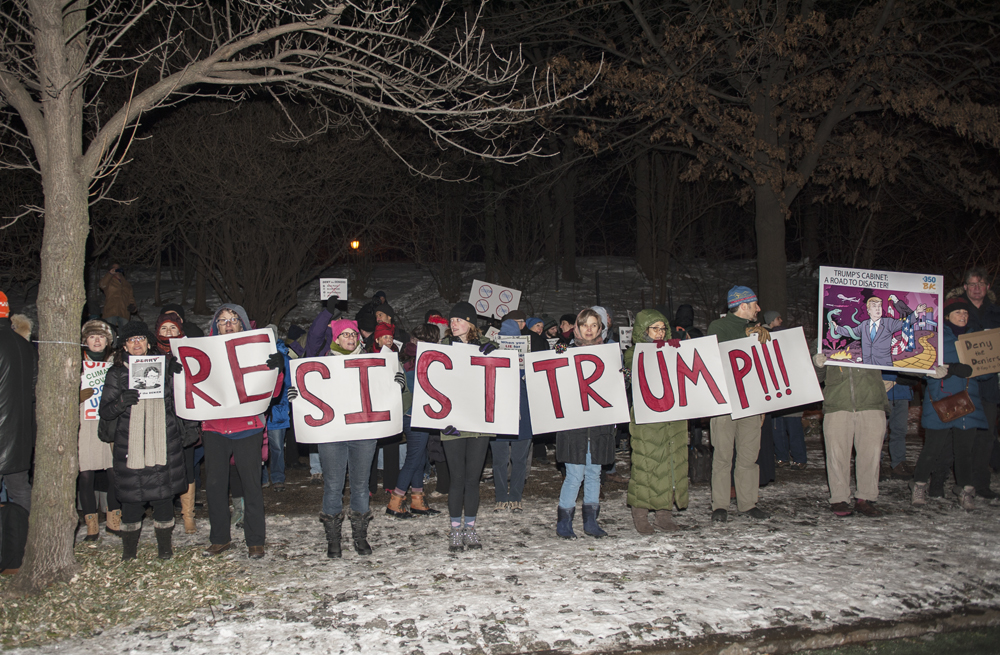 Step it up, Chuck! As part of a 350.org national day of protest to Dump The Deniers, more than 200 people came out on a frosty January night to tell Senator Chuck Schumer to resist the Trump administration and his climate-denying appointees.

In the transition to renewable energy, offshore wind could supply up to 40% of the power needs of NYC. The monthly meeting’s featured speaker is Patrick Robbins from SANE Energy Project, who will explain the current plans for building Offshore Wind in the Long Island sound, Cuomo’s latest move on this issue and the campaign ahead. After the general meeting, committees will meet.

Call Your Senator and Let Them Know you Support the BYOBag Law
Single-use plastic bags are extremely wasteful and result in harmful pollution to city streets and the ocean, and exacerbate climate change with unnecessary use of energy. In May, the city council adopted the BYOBag bill, which would add a 5-cent fee on each single-use bag. Recently, however, New York State Senator Simcha Felder (D-17th District) introduced a bill to prohibit New York City from imposing the fee. If passed, the “preemption bill” would strip away local control from the city and put business interests ahead of environmental concerns. Now is the time to call your New York State Senator and tell them that you support NYC’s BYOBag Law and are opposed to the Preemption Bill (S362). The bill can come to a vote any day (even today). Find a sample script here.

On January 21, the day after the U.S. presidential inauguration, women will gather in Washington D.C., New York and around the country to stand up for our rights, our safety, our health, our families and our communities. A coalition of diverse organizations and individuals will unite and march as a “Women for Climate Justice” contingent during the Women’s March on Washington to stand for the health of our Earth and our global communities and 350Brooklyn will be participating in the NYC March. We invite all allies to join us!

What You Can Do to Stop the Pipelines

We can’t stop climate change if we continue to build fossil fuel infrastructure. Here are three things you can do to resist new pipelines:

Get Trained: Resist Spectra, who are at the forefront of the effort to stop Spectra Energy from building a methane gas pipeline from Pennsylvania into Massachusetts, will run a Direct Action Training on Thursday, January 26, from 6:30 to 9 pm. The training will be held at the Association of Neighborhood and Housing Development, 50 Broad St., Suite 1402, NY, NY (just south of Wall St.) If you are interested, email . Learn more. 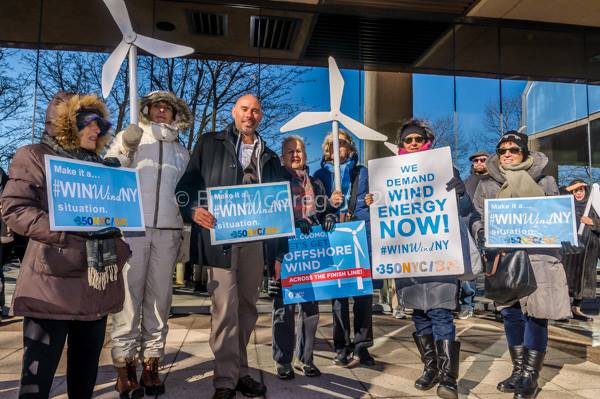 Members of 350Brooklyn joined members of the Sierra Club, other environmental organizations, and unions at a meeting of the Long Island Power Authority. We rallied and then testified before LIPA, encouraging them to support a proposed Offshore Wind facility off Montauk. We presented more than 950 signatures urging Governor Cuomo to mandate the purchase by utilities of 5,000 megawatts of OSW generated by OSW by 2027.

On Jan. 9, Governor Cuomo in his State of the State met us partway: he declared a goal of “up to 2,400 megawatts” of OSW-generated electricity to be purchased in NYS by 2030. We’ve still got a ways to go but it’s a step in the right direction.

First 100 Hours In the first 100 hours of the Trump administration, we will participate in rallies, vigils, demonstrations and organizing meetings around the country to set the tone for Trump’s Presidency: we are ready to fight back against the aggressive attacks on working people, labor unions, people of color, immigrants, women, Muslims, LGBTQ people, and our environment.