Happy New Year! One of our New Year’s resolutions this year is to resist the Trump administration’s agenda of discrimination, increased inequality, and climate change denial. If you are likewise resolved, join us on January 9 at 7pm for the nation-wide Day Against Denial, to demand that Senator Schumer truly lead in his pivotal role as Senate Minority Leader, to ensure that members of his party ask hard questions of Trump’s nominees during their committee hearings and to do everything possible to ensure that Trump’s appointments are not confirmed.

Cabinet of Deniers (and Some Hope)

Donald Trump has already nominated a number of climate change deniers to his cabinet, including the CEO of Exxon, Rex Tillerson, who has spent his career sowing climate change doubt and raiding the future to make himself and Exxon stockholders rich; Scott Pruit to head the EPA, though his is best known for suing the EPA and thinks the climate change debate is “far from over”; as Secretary of the Interior, Ryan Zinke, who wants to increase fossil fuel extraction at a time when we can’t afford it; and Rick Perry to head the Secretary of Energy, a department he once pledged to eliminate.

This despite the fact that the great majority of Democrats and Republicans want clean energy. But there’s some good news: America’s first offshore wind farm is up and running and Obama has taken steps to stop offshore drilling in the Arctic and part of the Atlantic.

All the more reason to hope and to resist.

Join us at Park Slope United Methodist for our monthly meeting when Patrick Robbins from Sane Energy Project will talk about offshore wind in NY, which could be a game changer for clean energy (the first offshore wind farm already opened last month). We’ll also spend some time planning. So if you want to be inspired by someone who is really making change through grassroots activism and then get to work, you’ll want to be there.

January 13, 7:30pm: The End of the Line (Movie Screening)
Park Slope United Methodist Church
410 6th Ave, Brooklyn
All are invited to this free screening of The End of the Line, the true story of a coalition of farmers, activists, constitutional conservatives and religious orders, who joined together and defeated the controversial Bluegrass Pipeline. Doors open at 7pm. Refreshments served. Followed by a discussion of local pipeline resistance efforts. Sponsored by PSUMC Social Action Committee and 350 Brooklyn.

What We’ve Been Up To

We Braved the Cold to Tell New York to Divest from Fossil Fuels: Fellow activist Betamia Coronel, who joined 50 committed New Yorkers on December 15, writes, “We were there to send a message to the city comptroller and the several dozen trustees of the NY city pension funds, who were meeting inside: it’s far past time to #DivestNY from dirty fossil fuel companies.” Read more. 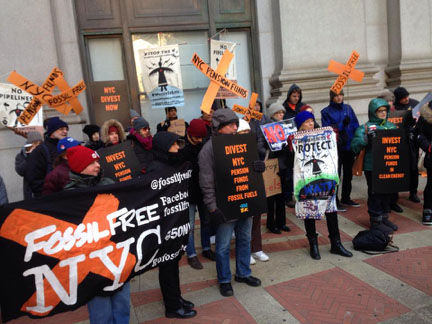 We Told Gov. Cuomo to Support Wind Power: On December 20, we joined labor unions, activists, politicians, and others to tell the Long Island Power Authority to commit to offshore wind. 350BK collected more than more than 900 signatures on petitions urging Gov. Cuomo to “build on your success with New York’s Clean Energy Standard and the Offshore Wind Blueprint by making an enforceable 10-year, 5,000 megawatt commitment to offshore wind. This commitment will hold electric rates down, create new jobs, and protect our environment.”