The new triangle of power, Trump, the Republican Congress and the extractive industries are quickly ramming through the elimination of regulations that interfere with their reckless pursuit of profit, succeeding in their goal to repeal important environmental regulations. On February 3rd, the House overturned the “Methane Rule,” which the Interior Department says would eliminate the release of 180,000 tons of methane gas into the atmosphere every year. Lobbyists and climate deniers want us to believe that regulations harm industry and reduce jobs. But we don’t have to choose jobs over our future. And though we won’t win every battle, recent events have shown us that we shouldn’t sit quietly while industry cronies and oligarchs try to convince us it’s in our best interest to enrich the rich. 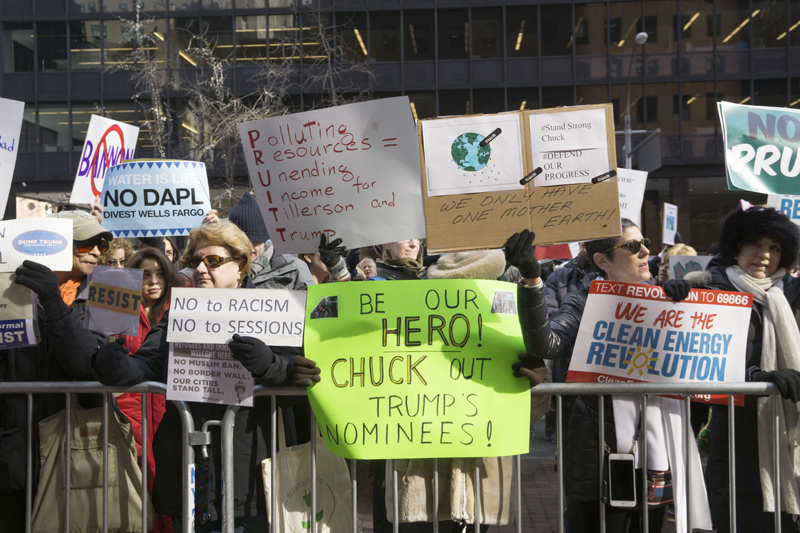 Actions You Can Take Right Now
:
If you have ten minutes, make some phone calls! TransCanada wants to build a fracked gas pipeline in Orange County. At this moment, they are trying to take advantage of chaos in the Trump administration to start cutting trees on February 24 without waiting for all legally-required state permits. Tell NYS officials to defend New York against powerful oil and gas interests. Hold TransCanada to the law or, better yet, deny permission for this pipeline altogether.
Call Governor Cuomo at 518-474-8390,  Attorney General Eric Schneiderman at  212 416-8446, and DEC Commissioner Basil Seggos at 518-402-8545.

If you have a couple hours, get informed! What banks are financing the Dakota Access Pipeline and similar projects? What can we do? Grassroots Action NY is gearing up a divestment campaign and the first event is an information session on personal divestment and bank choices. The event will be on Saturday, Feb. 25, at Verso Books, 20 Jay St., Brooklyn, NY, from 3 to 5 pm.  RSVP here

And we need your help:

Reach out to organizations: Are you connected with an organization that might endorse the march? Contact Mimi Bluestone and Lynn Neumann at at

Fundraising: Do you want to help plan a fundraiser? Contact Hannah Rosner at
Calling Park Slope Food Coop Members 350Brooklyn member Mimi Bluestone will present a resolution on Tuesday, Feb. 28 at 7 am asking the coop to support and endorse the climate march on April 29. The resolution will come up for discussion on Tuesday, Feb, 28 and will come up for a vote a month later at the March 28 meeting, also at 7 pm. Coop members who sign up in advance can get work slot credit for their attendance. The meetings will be at St. Francis Xavier School, 763 President Street between 6th and 7th Avenues. Bring coop ID to attend.

Join us at Brooklyn Commons, 388 Atlantic Avenue, for our March General Meeting. Featured speaker is Riverkeeper’s Jeremy Cherson who will explain the Pilgrim Pipelines. Always lively, informative, and geared towards taking action!

What We’ve been Up to

On February 13, a letter was delivered to Mayor De Blasio signed by 350 Brooklyn and many other organizations telling him: “We applaud your willingness to consider action to help stop Dakota Access and assert our rights to have a say in how our money is invested. Please divest the City’s pension funds and its business from Wells Fargo and the other banks financing Dakota Access. … We have a duty to ensure clean drinking water for those yet to come.”

Climate Justice in the Budget

“What do we want?” “Climate justice!”  “Where do we want it?” “In the budget!”This was the chant of more than seventy climate activists that disrupted NY State’s Environmental Conservation budget committee meeting on February 13. Organizations including Citizen Action, WeAct, SEIU, Sierra Club, 350Brooklyn and Buffalo’s PUSH, all members of the NY Renews coalition, converged on Albany to demand key provisions of the Climate and Community Protection Act are included in the budget. The action was followed by individual meetings with more than 20 legislators. The budget disruption was covered by ABC News 10, NPR Buffalo, Politico and TimeWarner Cable. Check it out: Protests interrupt NY DEC hearing on energy. 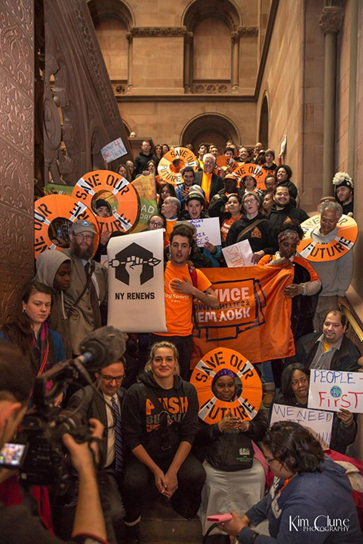 Valentine’s Day Divestment Rally
Members of 350Brooklyn, 350NYC, and other groups joined filmmakers, teachers, students, and others to call on Comptroller Stringer to cut ties with the banks financing the Dakota Access Pipeline and and divest fossil fuels from the city’s five pension funds. 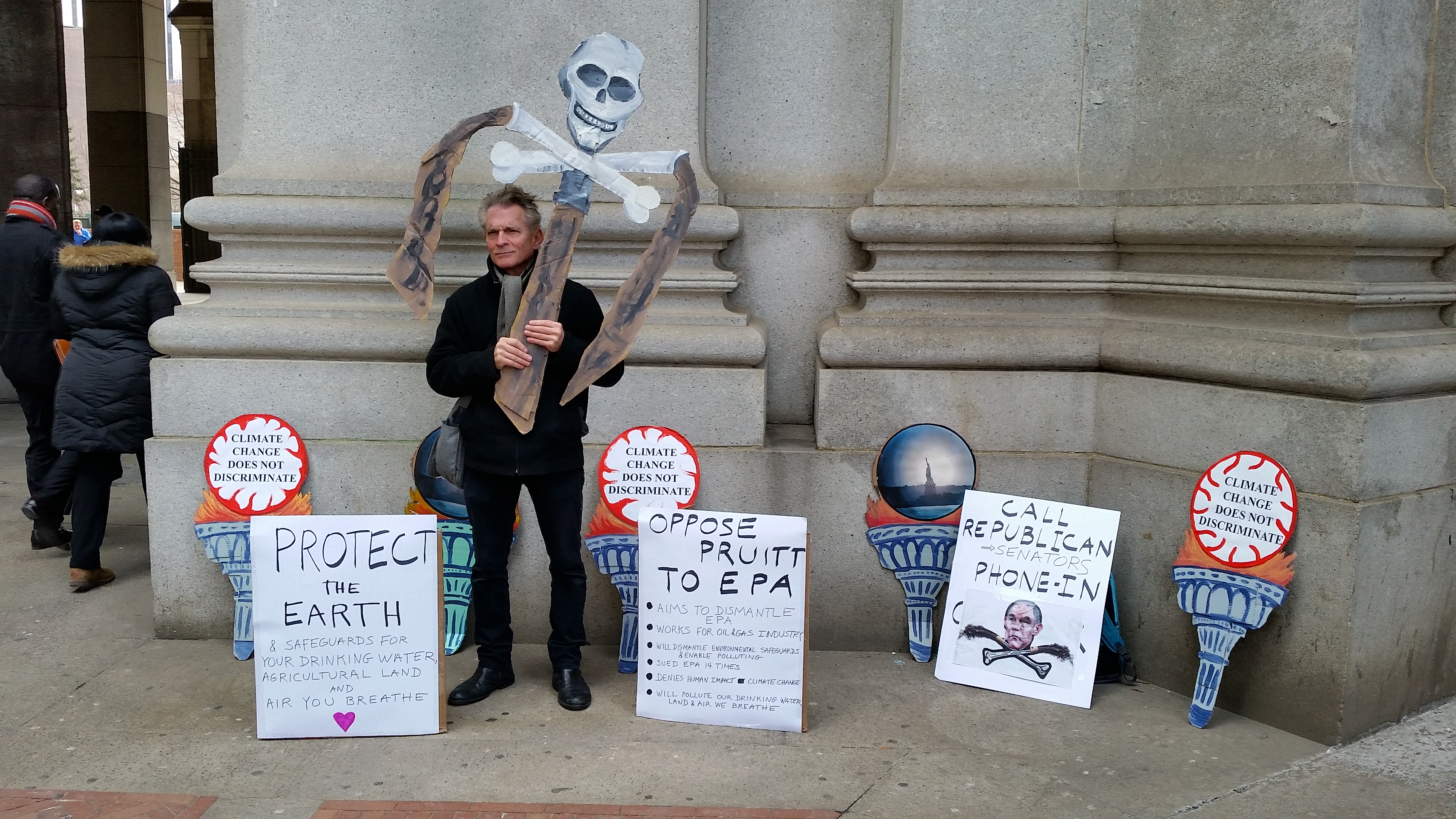 We told Schumer to Resist
On February 2, New Yorkers rallied at Senator Schumer’s offices urging him to resist Trump’s agenda! As the nation’s top Democrat, Senator Chuck Schumer must stand strong against Trump’s catastrophic Cabinet appointments and his climate-destroying plans. 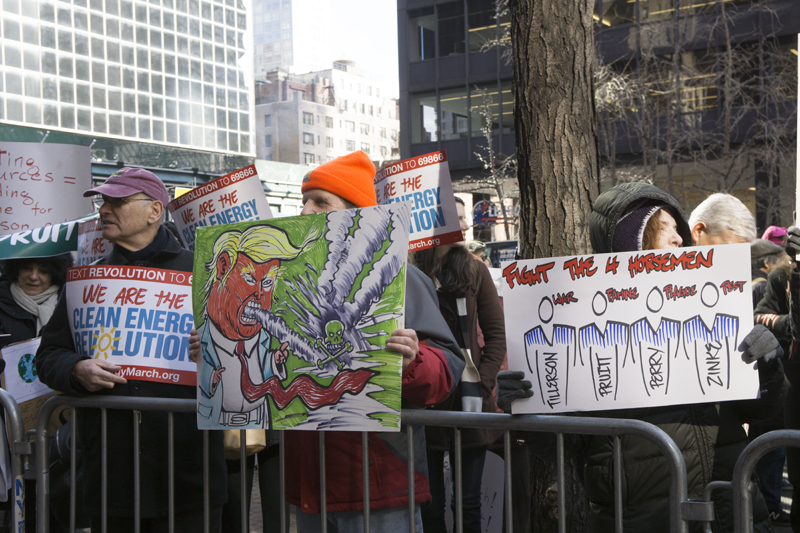