From restarting construction of the Dakota Access and Keystone Pipelines, gutting the EPA, and appointing a climate denying cabinet, the Trump administration has made it clear that nothing will get in the way of corporate plunder in pursuit of profit. This despite the fact that most Americans believe that the government is doing too little to protect the environment.

If you are one of the majority of Americans concerned about climate change, decide now to act. You can join the People’s Climate March in DC on April 29, attend our monthly meeting on March 9, call your representatives, and be one of the hundreds of thousands letting Trump know that the reckless destruction of the planet must come to an end.

An environmental organization that has protected the Hudson and other New England waterways for 50 years, Riverkeeper is now at the forefront of the struggle to stop the Pilgrim Pipelines before they begin construction. Jeremy Cherson will explain the proposals to build the 170-mile pipelines financed by Koch Industries and accelerate the transportation of crude oil down the Hudson with more barge berths. Learn how we can stop these pipelines that directly threaten our waters and land, while expanding the burning of fossil fuels, before construction begins.

Climate Action Conference
NYU, March 10-11
Bill McKibben will be speaking the evening of the March 11, and many of our friends and partners (Elizabeth Yeampierre, Bernie Sanders (by Skype), Antonique Smith, Jeff Sachs, Peggy Shepard, and more) will also be speaking or performing during the course of the two days. More info and the schedule can be found online here.

Outreach Meeting for the People’s Climate March on April 29th
Tuesday, March 14th 7:30pm
330 Wythe Street, apt. 5K, Williamsburg
Can you pass out flyers? Make phone calls? Make posters? Host a dinner party? Organize a brass band? Or come up with more creative ways to inspire people to take the bus to DC, and make this the largest Climate March ever? WE NEED YOU! Bring a friend!

Divestment Day
Union Square, March 18, 10 am
We will join Grassroots Action New York, Bronx Climate Justice North and more at Union Square to tell big banks like Wells Fargo, Citibank, TD, Chase, and Bank of America how we feel about their decision to fund the Dakota Access Pipeline. Starting at 10am EST, we will be rallying at Union Square in NYC and traveling around to branches of five of the major banks nearby as people withdraw their remaining balance and close their accounts together. Learn where and how to move your money here.

Coop members are encouraged to come to the general meeting on March 28, when there will be a vote on whether the coop should endorse the April 29th march and provide additional support, including a financial contribution and a loan of money for buses. The matter was discussed at the February general meeting where several 350Brooklyn members spoke in favor of the proposals to support the march.

On April 29 we will join thousands of others at a massive march Washington for climate, jobs, and justice. We’re marching for our climate, for the health and safety of our communities, for our future. And we’re getting there on a bus: tickets are on a sliding scale and you can sponsor a ticket for someone else. Get your ticket here.

What we’ve been up to

Our Representatives are Listening
On February 16, Comptroller Scott Stringer joined CALPERS and 120 Big Investors representing $653 billion in assets, calling on the banks who fund the Dakota Access Pipeline to “address or support the Standing Rock Sioux Tribe’s request for a reroute of the Dakota Access Pipeline (DAPL) that avoids their treaty territory.” Here’s the statement and list of signatories. This is evidence that our efforts are making a difference.

Legislative Committee Update
Rep. Yvette Clarke (D-NY-09) held a Town Hall Meeting on Weds Feb 22nd near Grand Army Plaza. The crowd was fired up, as was Rep. Clarke and guest panelists. When asked about the house bill to eliminate the EPA, she said she’ll vote against it given the chance and work to address other environmental issues as a member of the Energy and Commerce congressional committee. The 350BK Legislative Committee asked Rep. Clarke to consider joining the bipartisan Climate Solutions Caucus. The CSC requires both a Democrat and Republican to join together to maintain the bipartisan balance and is endorsed by the Citizens Climate Lobby. In response to the question posed by 350BK member Kari Dietrich, Rep Clarke said she hadn’t heard of it, but: “If it’s bona fide, I’ll do it! If it’s not, I won’t.” 350Brooklyn also asked whether she would endorse and participate in the April 29th climate march, and she said that she would, which the crowd approved with cheers. The 350BK Legislative Committee members researched the climate records of some Republican members of congress, and sent emails & letters recommending a handful of potential partners to join the Caucus. We will update you on our progress!

Every Saturday: Divestment Demonstration: “We stand with Standing Rock!” 350Brooklyn joined neighbors protesting Citibank’s role in financing the Dakota Access Pipeline. Join the group on Saturdays from 1:00 til 2:00 pm at Citibank’s Park Slope branch: Seventh Avenue and President Street. Come out to oppose this climate-busting project that threatens the water supply for millions of people.

For the record, on this particular mid-February day it was 60 degrees in the sun — great for protesting, but a symptom of our larger problem. 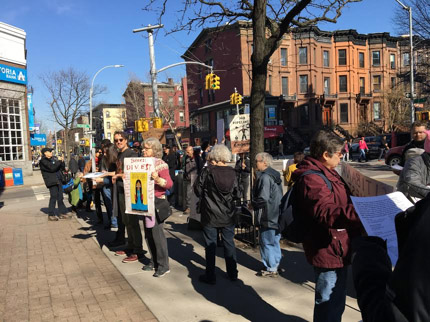 Got Questions or want to get involved with one of our committees? Go here.