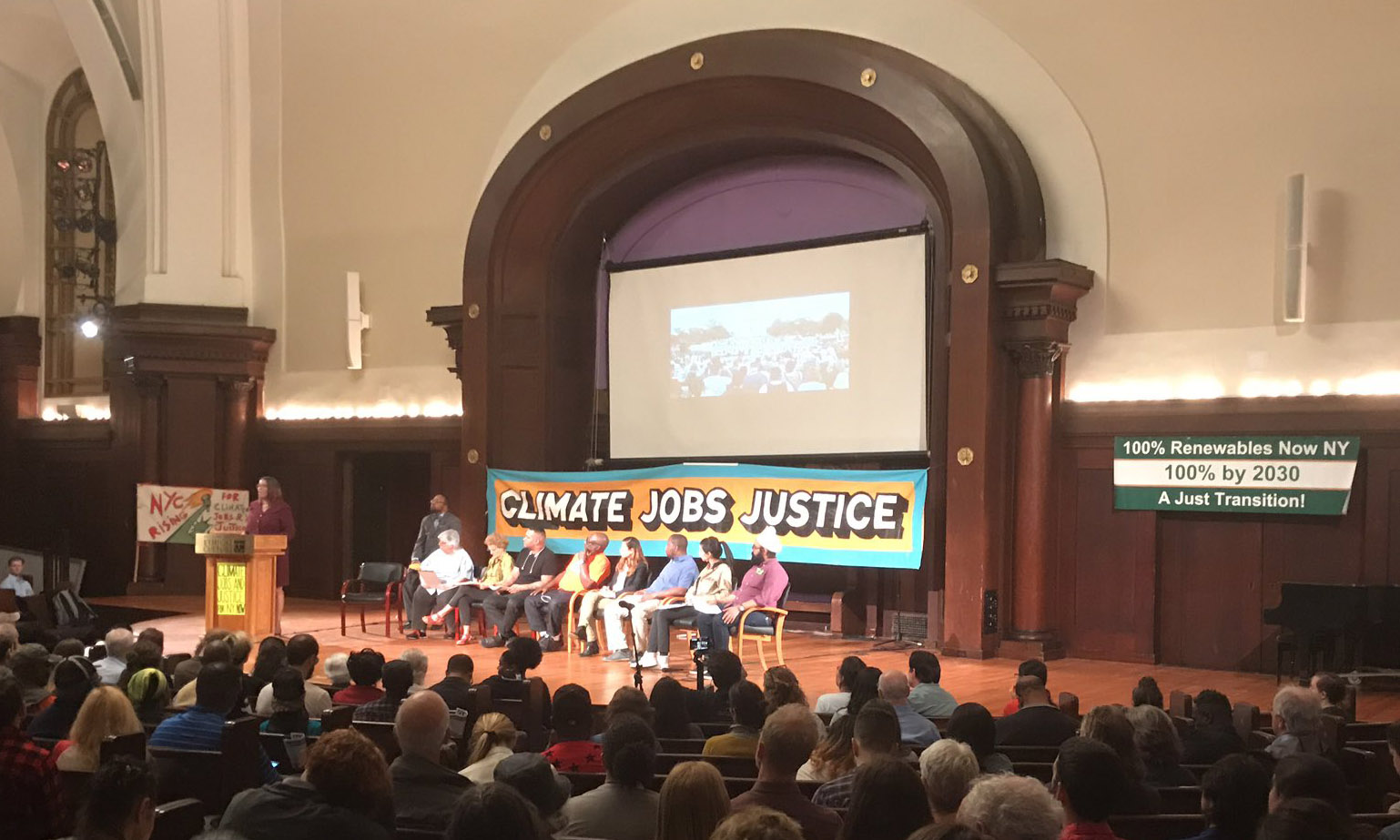 Next Meeting: June 8
7:30pm at the Brooklyn Commons, 388 Atlantic Avenue
At the next monthly meeting learn about organizations that work for climate justice here in Brooklyn. We will focus on intersectionality and the connections between environmental, economic, and racial justice. Featuring Mark Winston-Griffith, educator, writer, and founder of the Brooklyn Movement Center and Karen Blondel, who will discuss the new Gowanus Neighborhood Coalition for Justice and Michael Higgins of FUREE (Families United for Racial and Economic Equality) a key player in the community’s survival of Sandy and climate justice leader. Bring a friend!

June 6 Lobby Day
NY Renews is working to pass the landmark Climate and Community Protection Act, a bill that would legally mandate the elimination of climate pollution in the state by 2050, while protecting frontline communities, and ensuring fair labor standards for renewable energy jobs. The bill is likely to be passed through the NYS Assembly in the coming weeks, so they’re zeroing in on the Senate. Join us on June 6th as we take to the halls of Albany to persuade Senators from across New York that in the era of Trump, they must stand with communities and workers, and they must stand up for climate justice. Book a seat on the bus today.

New Yorkers Demand Divestment
Even as renewable energy gains momentum, the seas may be rising faster than we expected. We must act now and act quickly. That’s why so many New Yorker’s told NYC Comptroller Scott Stringer and Public Advocate Letitia James that they demand New York divests from its investment in the fossil fuels that put all of humanity in peril at the NYC Accountability Forum on May 16. And why we all need to be loud and clear that we are in a climate emergency. Sign a petition calling for New York to divest here.

350Brooklyn at the Gowanus Expo
The Gowanus Canal, once known as a dumping ground for dead mobsters(!), with its current mix of hot real estate and superfund woes has become a robust center for community activism. The Gowanus Expo on May 21 was a lively event that featured neighborhood youth showing their skills, training about “seed bombs,” representatives from the Department of Sanitation’s 0x30 (Zero waste to landfills by 2030), the NYC’s Department of Planning participatory community process PlanGowanus.com, the Open Sewer Atlas project, 350Brooklyn, and the fabulous Artichoke Dance project promoting the Global Water Dances that will be performing on the Gowanus Canal on June 24.

Int 1480 is an industry-backed bill that would classify EPS foam (commonly known as Styrofoam), as “recyclable.” But this is a sham. The Department of Sanitation looked into recycling Styrofoam containers and found that they could not be recycled in an environmentally effective or economically feasible manner. Read the report. The City Council already banned EPS foam containers in 2013 and since then the industry has tried every trick they can think of to keep Styrofoam food containers in New York City. Int 1480 and 1480-A is the industry’s latest attempt to prevent the City from moving forward with its ban on EPS foam. For more information on Styrofoam, check out this article

Call script for your Council Member:

Hello, my name is [BLANK] and I am calling as a concerned citizen. I am calling to urge Speaker Melissa Mark-Viverito to oppose Int 1480 and 1480-A. The bill to allow curbside recycling of Styrofoam is a sham, as even the Department of Sanitation’s own report states that Styrofoam cannot be recycled in an environmentally safe or economically feasible manner. Styrofoam should be banned, and to this end I urge Speaker Melissa Mark-Viverito to support Int 1596.