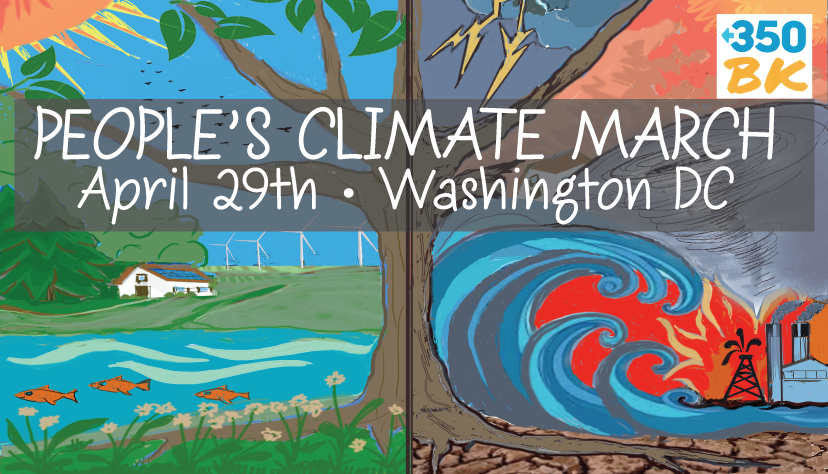 Why We March
On April 29, the 100th day of Trump’s presidency, we will march in the streets of Washington D.C. to show our leaders and that Trump has not broken our will nor tempered our resolve. There will be sister marches all over the country and abroad.

Trump and Republican actions introduced since January 21 amount to an aggressive war on the natural world that will only hasten the climate crisis (see a list of his worst offenses on our website), endangering our planet and communities around the world.

We’ve blocked Trump’s attempts to overturn the Affordable Care Act and stymied his efforts to unjustly ban Muslims from entering the country. We will march on April 29 to give notice that we will continue to resist every attack on our communities, our rights, and our planet.

Will you join us? Get your bus ticket now.

Drop in on Thursdays! The New York PCM headquarters hosts Volunteer Thursdays from 3 pm to 8pm.
Make phone calls, push out social media (bring your laptop), eat brownies, identify leafleting sites. If it’s a nice evening, you might even go down on the street to leaflet passersby. The address is 236 West 23rd Street in Manhattan (between 7th and 8th Avenues), 7th floor.

Invite Your Friends! Send them an email, invite them to the Facebook event, call them, text them, send them a Snapchat video. Whichever way you want, it’s important for you to reach out to those around you. Also important as the action gets closer to re-invite people! Reminders are crucial.

Social Media: Tell everyone about the march and why you’re participating. Share the Facebook page, tweet using the hashtag #climatemarch and #peoplesclimate, post these graphics to Instagram. Make sure no one in your network can say they didn’t hear about the march. You can find more social media resources here.

Blitz The City! This Saturday, Sunday, and Monday, April 8, 9, and 10th, people all over NYC will be telling New Yorkers to get on the bus! 350Brooklynites are needed to hand out flyers at Brooklyn sites like farmers markets, museums, subway stations—anywhere where there will be a crowd. Can you spare an hour? If so, let Marc know: .

Auction: Broadway is turning out for the PCM! Mark Ruffalo, Annie Lenox, and many others are donating items and experiences for an online auction to benefit New York PCM.  Alert your friends and watch for an announcement!

And, of course, BE ON THE BUS: Buy your bus tickets!

Rally to Save the EPA
Tuesday, April 4, Noon to 1pm
Office of Senator Chuck Schumer, 780 3rd Avenue • Manhattan
Donald Trump’s assault on the Environmental Protection Agency threatens our communities. Trump’s proposal to slash the EPA budget by 31% endangers our water and air, and would decimate programs that combat climate change, clean up hazardous waste, and protect our health and safety. Senate Minority Leader Chuck Schumer must lead the charge to stop Trump’s dangerous cuts. For more information, contact Eric Weltman: (347) 778-2743 or

Hope Springs High on Friday April 5! Have some fun and raise money to subsidize bus tickets for low income New Yorkers at the same time! April 5: Music and Performance Art with Healix 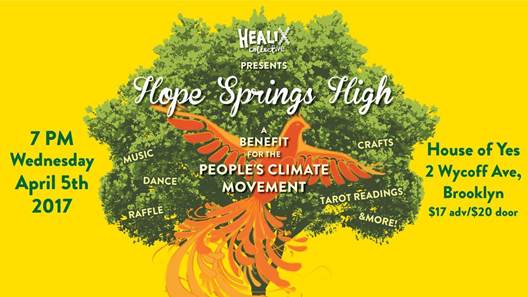 Party for the People’s Climate March
Friday, April 7th at GOLD SOUNDS, 44 Williams Street in Bushwick Laugh, shake it, lift a glass and party hard at this fundraiser. Featuring six stand-up comedians and djs Ashburn Davis and Mr. Tipton. Doors open at 8:00, party till 1:00, bring your boo or your crew
Learn more. 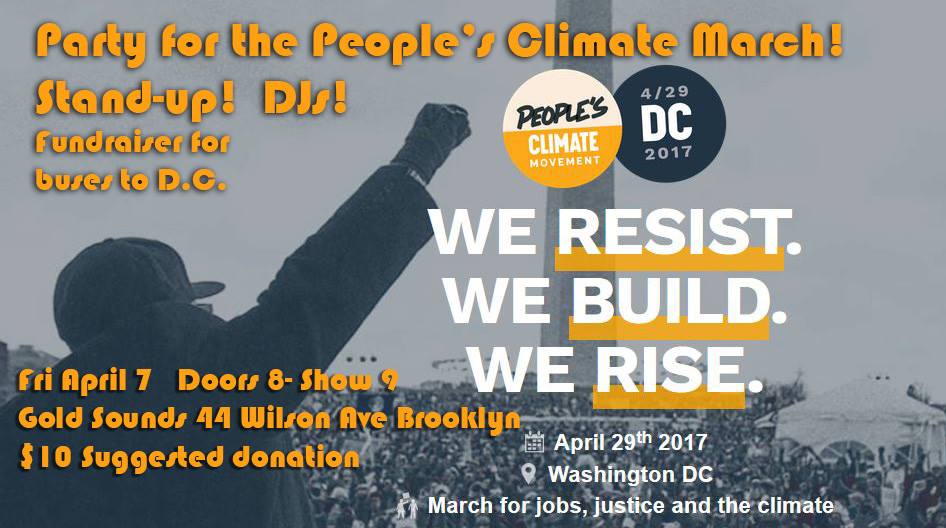 Park Slope Food Coop Endorses and Helps Finance the PCM
Mimi Bluestone of 350Brooklyn and activist Nancy Romer led the charge and proposed to the 17,000 member food coop a request to endorse the march and provide $10,000 in financial support to pay for some of the short terms salaries and material support needed to build a national march. One March 28th, with a strong majority of about 80%, the coop approved the proposal, and the coop is not only providing this important support, they are also working hard to fill the buses.