On the 100th day of Trump’s presidency, 350Brooklyn joined more than 300,000 people around the country at the People’s Climate March, demonstrating that we will not stand quietly by while this administration attempts to decimate the planet, harm the people who live on it, and rob future generations. And we’re not slowing down.

Below you can find out about upcoming meetings and events and actions you can take. Have a look and decide what you’ll do next, and remember we’re together in this fight. 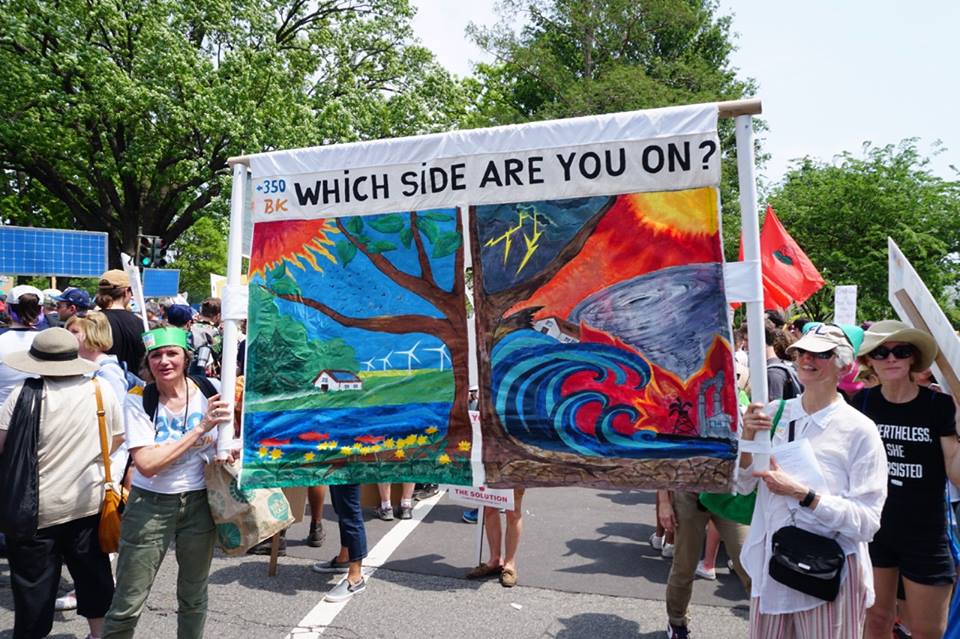 Next Meeting: May 11, 7:30 pm, Brooklyn Commons
The business model of the fossil fuel industry is in no way compatible with a safe climate. This May, #DivestNY is coming together with divestment organizers across the globe to demand that our institutions show their leadership and acknowledge the damage fossil fuels cause. Mark your calendar and learn how you can participate in Global Divestment Week at our next meeting with Beta Coronel, US Reinvestment Coordinator for 350.org. Drawing inspiration from the anti-Apartheid divestment campaign of the 1980s that helped end white rule in South Africa, the current global divestment movement aims to dismantle the fossil fuel industry and shift investments to renewable energy. Hear what’s going on locally and around the globe! 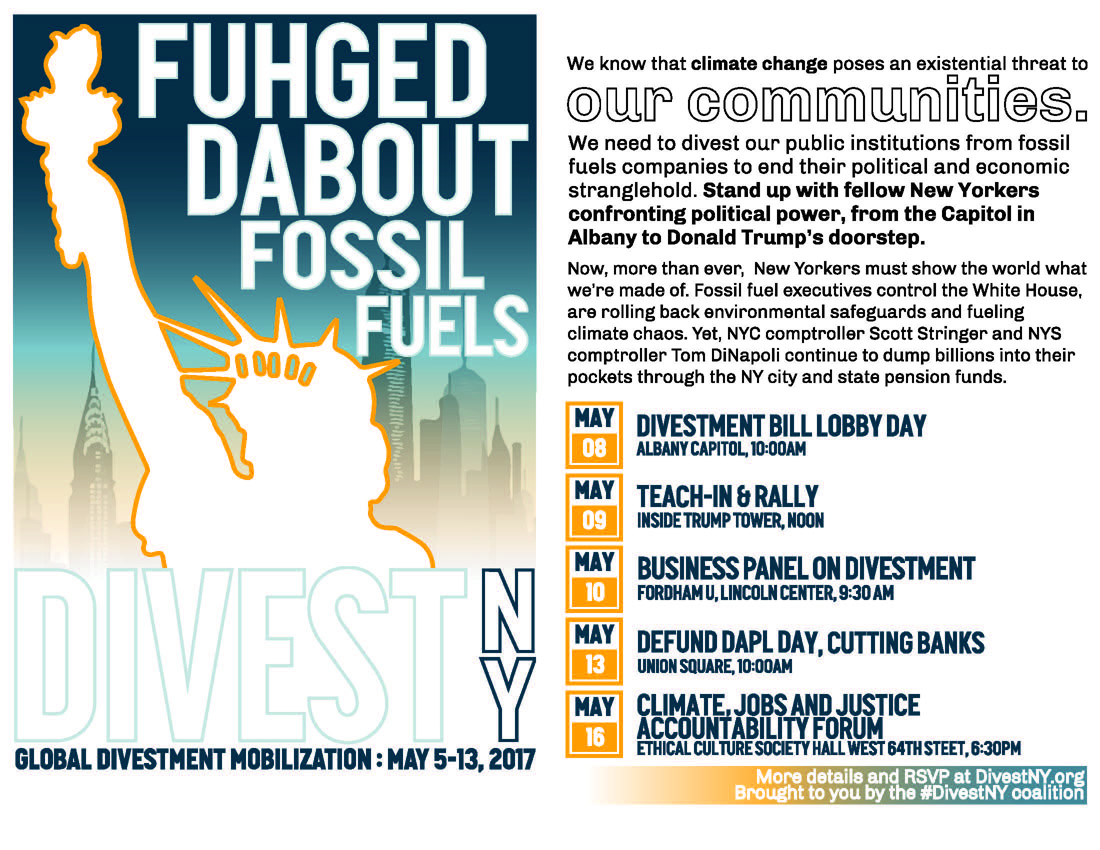 Stand Up Brooklyn Organizing Town Hall
Monday, May 8, 2017, 6:30 pm
St. Francis College, Genovesi Center, 4th Fl., 180 Remsen Street in Brooklyn  Representatives Nydia Velazquez, Yvette Clarke, and Hakeem Jeffries are hosting this town hall: Donald Trump represents a direct threat to our communities. Whether it is women, Latinos, African Americans, the LGBTQ community or our immigrant neighbors, this current Administration is sowing fear among Americans and New Yorkers. But, we don’t have to take it sitting down! It’s time for Brooklyn to Stand Up!

Click here to register for the town hall today.

Town Hall with Robert Carroll
May 10, 7pm,
John Jay Educational Complex, 237 7th Avenue, Brooklyn
Assemblymember Robert Carroll is hosting a town Hall with NYC Comptroller where attendees can voice their thoughts and concerns about Trump’s budget and what it means for NYC and Brooklyn. RSVP today to

Movie Night: RiverBlue
May 12, 7 pm,
Park Slope United Methodist Church, 410 6th Avenue, Brooklyn
Riverblue spans the globe to infiltrate one of the world’s most polluting industries: fashion. This groundbreaking documentary examines the destruction of our rivers, its effect on humanity, and the solutions that inspire hope for a sustainable future. Mark your calendar to join 350Brooklyn and the Social Action Committee of PSUMC for this free screening.

May 12: Speak out against the phony foam “recycling” bill
The New York City Council is considering a bill that would designate polystyrene (or Styrofoam) as recyclable. Recycling polystyrene is difficult and expensive and has never worked in any municipality. This is just an attempt to avoid polystyrene ban. We need you to attend the hearing and testify against the industry’s “recycling bill” and in favor of a ban on foam food and beverage containers in New York City. Learn more about the bill here.

Bagels and Resistance
Every other Sunday this group of New York progressive folks meet to channel their outrage and disgust into constructive action. They plan the resistance through tactical approaches to taking back power from right wing extremists. Working groups are taking a strategic, actionable approach to issues including: immigrants and refugees, fighting climate change, saving health care, and winning elections. And they eat bagels. If you love bagels and resistance, you can learn more and get involved here.

What we’ve been doing:

Our posters and headpieces made a splash on Earth Day at a rally at Foley Square. 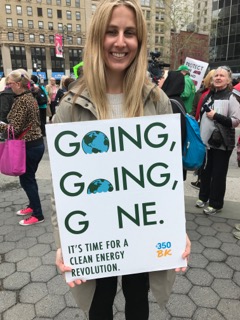 Wendy Fried spoke to the Bay Ridge Democrats about the People’s Climate March. She also talked about the invasion of New York State by fossil fuel infrastructure and the need to educate legislators on this topic.

350Brooklyn members helped pass the Park Slope Food Coop resolution to endorse the climate march and to provide $10,000 in financial support for the march.

Bernice Gordon represents 350Brookln on the Administration for Children’s Services City-Wide Head Start Policy Council to inform and engage the mostly Head Start and Child Care parents who form the Council’s membership about climate change. As such, they have participated in petition-signing activities, attended demonstrations, and shared the handouts she provides with the staff and parents in their local programs.